Is being nice beyond business? 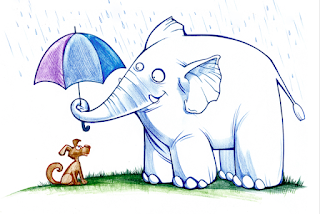 The human race has made significant progress since it came into being. We’re no longer naked creatures chasing animals barefoot with the hope of satisfying pangs of hunger. We’re evolved and now have greater goals to go after, we’ve put man on the moon, many machines made by us circle celestial objects we still know very little about, we however still chase, not animals, but humans for quicker food deliveries sometimes and on other occasions one another for nothing of value.
We’ve not only devised language and formalized dialects but have also quite extensively defined the design of civility and organized most of our relations and contacts. We’re born under medical supervision, sent to institutions to gather education & know-how, we fall in love .. marry the person in fan fare and start another circle of life with our partner.
All of us want to succeed at everything that we do, we wish to gain, to accumulate, to rise above the rest, be known, be valued and above all, have all that we want right within our comfortable reach.
If this were to be told in fewer word, perhaps, saying that we wish to be profitable always won’t be an unfair representation.
All of that is very good.
But have we in the process become a little less human? Have we forgotten to believe that passim isn’t necessarily deep; nor optimism shallow? Have we become so insecure that we care way too much about things that don’t really matter that much?
Have we lost the need to be in constant awareness of how short life is & how little we ultimately lose from risking everything?
Let’s not forget, what the world now is .. is nearly a pale shadow of what it could be one day.. we are still at the beginning of history, in that sense. It is upon us to make that a reality – it doesn’t require much of an effort beyond the ask of being virtuous.
It is perhaps easier for me to lecture on history, Indian independence, and even world history to a certain extent but “being nice” isn’t really something that I have read but I deeply feel and care about, the need to be “nice” – so sharing.
I think, to be good, we really need to as step one shed the load of insecurity that we carry with us, by doing so the unpleasantness that it creates will on its own disappear making room for much desired “goodness”.
To make it happen all of us would need our own little toolkits – below is mine. Disclaimer: May or may not work for you 🙂
Resilience – The art of keeping going even when things are going dark, accepting reverse as normal refusing to frightened others with one’s own fear, remembering that human nature, in the end, is reassuringly tough.
Empathy – The capacity to connect imaginative with the sufferings and unique experiences of another person, the courage to become someone else and the desire to help.
Sacrifice – The ability to give up on something dear for the sake of others with a smile.
Politeness– It is going beyond having good manners and being nice it is the conscious desire to not hurt anyone on purpose.
Humour – The ability to see the funny side of situations of all kinds. It is integral to wisdom, it is our ability to softly locate the gap between what is and what should have been. Like many other human emotions, humor also springs from disappointment but only when optimally & creatively channeled.
And at last, would mention Forgiveness and Most important- HOPE for a better tomorrow.

Those of you who know me would have heard this many a times from me .. let me repeat it here as well – being nice costs nothing.

On that note .. time for me to leave .. see you on another side.
Spread the love