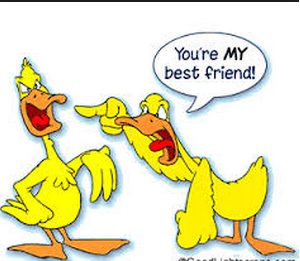 “Friends are a need and not luxury” is an expression that would garner general consensus, without much deliberation/justification. No matter what age group one is in, what educational background on comes from or caste, creed, color, health status or anything else – everyone has friends, needs friend(s).

Finding a direct answer to this question is impossible, everyone has friends,but still unable to answer this question – why is it so? It isn’t a mathematical equation or a chemical reaction that the solver/performer knowns from the stage/step of activity – it is certainly something intangible, which is related to the inner self. We know when we get to meet someone new, we know how many times we met , where and over what – but non of us know for sure, which was that moment , when an acquaintance becomes a friend? It is just as strange as true!

#1) “objects of agreement”. All of us lack wisdom, witt, reason on something or the other on an everyday basis – and it is this lapse that earns us disagreements, criticism and on some extreme situations rifts too! It is in these moments , we feel the need to have someone,who would stand with us beyond the call of logic and judgment – and here starts the search of such gullible beings who we forcefully gotten in friendship with – these are truly. -“objects of agreement”

#2) “common ground” :- Many of us hold different views on how something shld be done, but largely agree on the need for the thing to be done – these are people who may take varied routes but there destinations are more often then not common – for this common ground – people call themselves in friendship, a friendship of common grounds.

#4) “selfish manifestations” : – At the end the most undesirable form of friendship, one in which people are together purely because being with the person in question is profitable – most selfishly untrue in nature but unfortunately is called friendship too –

If we were to be true to ourselves, we wouldn’t be able to deny having friends or being friend to others as part of all the four categories – my only submission is try to get more and more people to become friend on common ground from being friends from the extension of immediate society.

Simply put, friendship is the smile that brings the heart to beat normally, that strength that enables us to compete fiercely, that light which when falls on objects lets our eyes see them beautifully.

With the payer that you earn enough and more friend – I’m ending this.

“Separation”- is it “Selfish” or “Sacrificing” of simply fear?

Demonetisation, Its not only about economics!

From service to “Customer Experience” !

Someone who likes to read & write!

#EmployeeSafety #EmployeeFirst
Being the coolest place to work just took on a whole new meaning for us.​
Every employee submit themselves for a temperature check before entering the centre.

#EmployeeSafety
Our support staff have been on the frontline of our fight against CORONA, now that centres have re-opened.
They carefully clean and disinfect the entire office to ensure the health of our teams