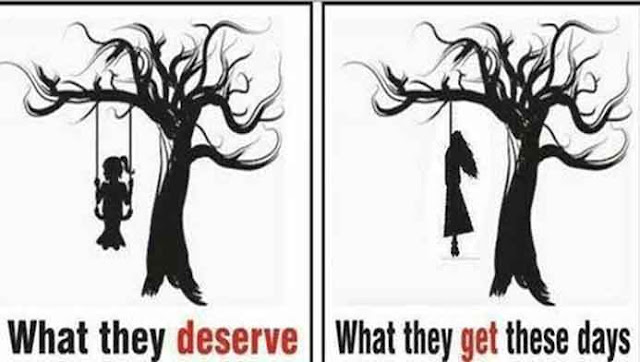 We’re a country of extremists, yes, at least in matters, concerning women! On one hand – we accept and proudly thump our chest to a tradition which professes woman being deity, Devi & Durga are a few titles that we often associate with ladies, not just that, we even have full blown festivals to celebrate the very idea, observed across the length and breadth of our country. At the same time on the other hand – we shame our women for everything under the sun, from what they wear to what kind of lifestyle they lead, to getting brutal under the hideous cover of love Jehad, domestic violence, sexual crimes like – public to mass molestation and the horrendous incidents of rape – women of all age groups, backgrounds , creeds & colours are subjected to these atrocities.
Why the hell are we so hypocrite?
It is not that “gender equality” has had no place in our society, it has always been in public discourse, degrees may vary given contemporary political climate. Last year major breakthroughs were achieved, it of course was not an enlightened or self initiated move, but ones that were pushed down the throat of orthodox, ignorant & regressive idiots who were at the helms of affair at Shani Signapur and Haji Ali Dargah. The country did unite demanding justice when horrifically bone chilling Nirbhaya happened, Arushu talvar murder case also echoed in Indian voices, there has been considerable opposition to mad Khap Panchayat disciplines etc. Government, too, at least at a PR level is seen doing the right things .. “Save the girl child” & “free education for the Girl child” in many states have stood the test of time.
We’re largely a free country, women have earned their place in important and well deserved positions in all walks of life. When a Sania Nehwal, Shakshi Malik or PV Sandhu makes it to the top in their respective fields .. the country rises in celebratory joy and doesn’t spare anything in rewarding and respecting them. Their stories of success are told and re-told with a lot of pride and sense of belonging.
Then, the real question is – why is that we still see upsurge in sexual crime against women? Why is it that the national capital is shamefully also the national rape capital? Why is it that most cases of sexual oppression aren’t even registered? Why is it that  women become victims of acid attacks and triple talaq in our country – WHY?
What’s wrong with a country that doesn’t let an occasion pass by without shouting from the roof how rich its cultural heritage is and how profound its “SANSKARS” are?
If you were to conduct an independent survey .. you would see almost everyone voting in favour of women, barring a few lost cases who think Burqa should rightfully confine women all the time, or that they should be killed before they are born, because “Jahan Dudh Dahi Ka Khana Woh Mera Haryana”! (These are just two examples, we have fanatics in all faiths and states)
So, public awareness and public sympathy both are with the women, there are considerable evidences to support that! We’re a country run by very elaborate constitution, so we got our set of rules and laws right as well – yet, the reality of our times is as grim – mass molestation happens in India’s most cosmopolitan and progressive city, Bangalore, the IT capital of the nation, WHY?
We must be doing something really wrong .. what is it? Let’s explore!
We sow the seed of this problem when we raise our sons and daughter differently, we mostly unintentionally engrave it in the minds of our kids that there are “things” that a daughter shouldn’t do .. coz they could be “unsafe” and this very notion grows bigger & faster than a tumour in sick male minds, who see the false notion of female being unsafe as their inability to object and thus male considers it their license to harsh the other gender. This evil judgment when coupled with an education system that guards sex eduction as the deepest secret of mankind in a country which is 2nd most populous – result is crooked mindsets.
When we tell our daughters to dress in a particular manner or not talk openly about certain things which are so integral to their womanhood  – we unknowingly but surly, make indelible impression of inferiority & restrain in our women, who tend to give up more often that not and the result is .. a world that actually belongs to all genders equally, wrongfully, continues to be called “Man’s world”.
When we encourage our kids to make friends in their own gender .. we create punishing mystery about the other gender which when gets company of an uninformed and evil mind, creates a false belief that a gender is stronger than the other gender and therefore the stronger may overpower the weaker for pleasure! – that is the problem!
The problem is that we still consider molestation and rape as sexual crimes, when these are essentially crimes of violence, in the heinous act the perpetrator overpowers the victim physically and then has his way – we need to set this narrative right! If we succeed in transforming this perception, our women would grow up knowing that it is not beyond their means to not fight, should they have to, for their wellbeing, they can learn ways to not bow down to physical intimidation – strength will come from that!
Making it present itself as a crime of violence, will also go a long way in saving the victim form the societal prejudice and the criminal will be seen in a whole different light, the judicial system will also benefit.
This is a real problem and not one that will get solved overnight .. the very nature is such! But we have to make a beginning today .. if we do not wish to live rest of our lives with our heads buried in sand of shame.
Let’s make this world a respectable place for everyone!
Spread the love

Customer Feedback, should you care?

Someone who likes to read & write!

#EmployeeSafety #EmployeeFirst
Being the coolest place to work just took on a whole new meaning for us.​
Every employee submit themselves for a temperature check before entering the centre.

#EmployeeSafety
Our support staff have been on the frontline of our fight against CORONA, now that centres have re-opened.
They carefully clean and disinfect the entire office to ensure the health of our teams

#EmployeeSafety #EmployeeFirst
As our teams start coming in from this week, we felt it was important our sanitation processes to ensure that all their equipment is safe to use!

Our IT team has really been at the forefront in our fight against the COVID crisis. They created innovative tech solutions that allowed our teams to work from home seamlessly & securely.
Their efforts enabled processes to get back online within 48 hours of the National Lockdown