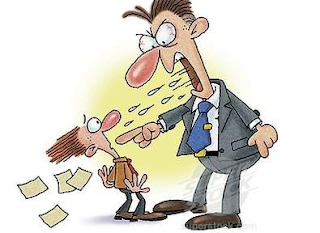 Well, this question is likely to gather different responses from the same respondent when asked in different circumstances – call upon someone who has just stolen a smoke break from a performance review – he might see his bosses as dirty monsters and when thrown to someone who has just been defended for a mistake on a forum/email by his boss is more likely to see him as blessing. So are we employees/subordinates utterly selfish, opportunist, live by short memories or are bosses truly double faced living creatures who meaninglessly exist to be watchdogs , while a few actually become dogs in the act?
It does bring mischievous smile to my rather coffee keen  lips – 2 yrs from now I shall complete a decade in the jail where bosses are the jailers and me with other peers are inmates – in these years of professional career I have served 12 bosses (Suresh Kumar, Soumya Chandra, Lokesh Marwa, Gaurav Sethi, Karunakar Raju Thokachilu, Sunil Marar, Manish Rajan, Manish Kumar, Sanjay Nandy, Neelabh Upadhyay, Ashwini Kumar, Vikramjeet Mahela), Asad Rashid, Amitabh Ramesh Vartak – well, that’s too many heads to serves in thirteen years!
Each of these 14 people were different, unique and peculiar in their ways – some were consultative , some were autocratic, some were mere taskmasters, some were true leaders , visionaries, gentlemanly, well behaved while some were real pain in the wrong place, foolish and for some I still maintain that they didn’t deserve to be called even literate –
Do you think my responses are unique – well, I don’t think so , ask any one ( preferably one who has served as many as I have) and he/she will give  similar responses – one simple answer is bosses are nothing but bosses!
Many jokes float in the corporate earth about bosses – let me quote a few that I have been hearing from one of my recent bosses about bosses in general ( not sure if he meant these for his bosses too)
And there would be many more that you would recite/invent to sometimes appreciate the situation and otherwise the situation creators _ I haven’t had all times as best times with my bosses and I would have thought otherwise if I wouldn’t have ever been a boss myself to anyone, for some look at me too with all the emotions with which I stare at my bosses _ I can therefore say that I am on a neutral ground to comment on the subject.
Let’s be honest in accepting that we are more comfortable with the word “supervisor” than with the expression “BOSS” – but the hard fact of life is that while you may consider someone to be just your supervisor, he/she remains to be your boss! None of us like being watched, being monitored /measured , being told – while all of us want our bosses to appreciate, take a note of , talk about, in good taste ,that is, on every aspect of our delivery no matter how ordinary or let’s say as routine it may be.
So here is my take on the subject – Be Boss but be one that people trust, be a supervisor people love being guided by _ these may sound most interestingly simple but is immensely tasking and near impossible to attain, especially when you are boss to more than one subordinate . The key to harmony is in being transparent, honest, upfront but polite at the same time – rules/processes/policies that you make should hold good for every member in your team. You are not allowed to have your favourite in your team, all should be treated alike and every expectation should be well explained. Despite of all this if you are still required to use force (legitimate ones within the capacity of the office that you hold) do not hesitate! Also praise in public and reprimand in private, always!
Here is my piece of mind to all subordinates ( no matter how high in the hierarchy you are placed, you would always remain someone’s subordinate) – No matter how foolish he may sound, sluggish he might appear , fact of the matter is that he is your BOSS and not just your supervisor who is duly hired to get the work out of you in better interest of the organisation, don’t hold grudges , don’t let the boss grow over you, if he/she stoops below the level of professionalism doesn’t mean you are required to give him/her company there. Keep doing your work in the manner which you consider best, be truthful and loyal not to humans alone but to the organisational interest in having to execute a particular job, too
Bosses are in many sense like neighbours, you cannot choose them and they always live in the vicinity – so better exist in harmony!
My father always says , as long as you take care of people who work under you well, you wouldn’t need to bother much about a few souls (or whatever your refer them as) above you – On that note its bye bye 😉
Spread the love