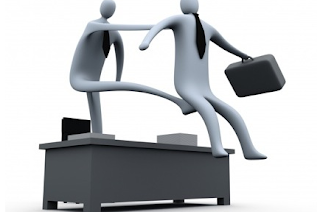 Of all the slips that we get to hear at workplace, the pink ones are most undesirable, a few slips are enviable too, salary slip for instance. Shedding off the old and getting on with the new ones is also one among many prominent ways of the nature, I’m referring to spring defoliation , when every tree no matter how huge, aged or thick, lets its old leaves depart so that new ones could breathe to being, giving new assurance of life to the structure holding it, the tree. Similar to spring in the corporate business is “slowdown” – when employers are sometimes under most financially dreadful of the circumstances are pushed against the wall and to keep flying they opt to shed some unessential weight – which when described most accurately should be called “Cost/Opex” and what can be a bigger recurring cost than compensation to employees/workers – so they are asked to part ways, in other words led-off
It isn’t as unheard an expression in the west – ask a middle aged working American and he would have more than a dozen of story about “x/i/my wife/my father was fired” , Europe is no exception either , however in Asian countries and especially in the Indian subcontinent, “layoffs” were largely uncommon, if I speak of my generation , we got to hear of it first and in a big way when 09/11 happened in the IT/ITES industry and then come the great subprime in year 2007-08, which reiterated the fact that “axing” would no longer remain propriety of the west.
A sector, which escaped the 9/11 and subprime too, could not remain immune to the 2G syndrome – a deadly dangerous virus created in the laboratory of UPA government and investigated or let’s say brought to broad day light by the Dr. Swamy – Yes, I’m referring to what may called the sunshine sector, which is now under what seems a state of permanent eclipse – the telecom sector. There is massive and well orchestrated and choreographed political  drama in the backdrop of it – there was a CAG report,  which government denied , opposition considered gospel of truth – it lunched over a complete parliamentary session, opposition demanded JPC and government was in constant denial, the matter was bounced off the apex court where competent and learned judges in one of its verdicts which was supposedly supported by CBI findings pronounced cancellation of 122 telecom licenses and it triggered number of shut downs , STEL , LOOP , Etislat are among companies which have reportedly decided to shut their operations in Indian market – as a result a couple of thousand skilled, hardworking and aspiring Indians are jobless.
Even before the verdict was out, banks acted wise to pull the knob to “temporary off” for companies to which it were to pay loan amounts in various instalments – which left the companies high and dry , without cash to expand or operate , consequent into another set of pink slip distribution.
We, the telecom professionals, now stand at the very center of an utterly vulnerable and terribly disturbing circumstance , where all of us can silently feel the bad news approaching , but at the same time have to keep positive, talk nice, keep smiling and hoping against hope – the amount of work at desk seems to have no relation to the fear – it keeps on pilling.
When it is so observable and to an extent, unavoidable – why are we (telecom professionals) scared? Is the question.
The work life for many of us is much longer than our association with the current employer where we can hear the footsteps of the “layoff news” growing louder by every passing day, why do we still fear ? We are not only skilled professionals but also highly paid (across all levels of hierarchies)? Most of us feel, laid-off-lot is unemployable, well it is certainly untrue but the hardship that one would have go through in that phase of hunt would undeniably be most painful – for many of us would have to step down not just by a couple of steps but many ladder of our mountain high egos and ask for help – So is that the reason?
In my assessment, more than being financial tremor , it is a social turbulence for many of us – we are grown up individuals, we live in a society and have a reputation to protect and live up to and therefore the fear, while stoppage in the inflow of monthly earnings is certainly another area of grief – for its not just about us or our bills but families that most of us support.
Giving the family aspect of the fear due important, I do not hesitate in saying that the fear is more emotional than anything substantial   – remember comrade’s, the very existence of mankind is uncertain, other than a few holy saints from the mythological texts, no ordinary human has ever known what await them in the very next moment , we still live, love, smile and move on – in this case, we at least have a clue of what’s around – so be happier , live fuller and work harder – life is certainly more than silly “layoff” fear – on that note – its bye bye from me 😉

17 equations that changed the world

Remember how #Dhoni allowed Dada take over as the captain of the Ind side in the final overs of his last match? Recall how smiling @msdhoni will always be in a corner of the winning picture, letting his team occupy the center of the frame? A legend in every sense of the word!

Dear @msdhoni,
Thank you for making ‘calm’ #cool again! Your composure redefined aggression & your love for making the most unusual decision at the most tensed moments of the game, made “taking risk” & “being different” attractive again! We’ve a lot to thank you for #Mahi #Dhoni

The helicopter that once used to fly off the middle of the bat might have got grounded forever but the wings of inspiration that those visuals gave a generation of atheists have a lifetime of flying left to do. A boy from a small sleepy town can do it too, because #Dhoni did it!